Doubt is a feeling and like all feelings it comes with an intensity depending on where it falls on the continuum between belief and disbelief. For example, I may doubt my ability to engage and entertain an audience with my speech but is that doubt nudging me to do further preparation or is it so intense that it is enough to hold me back from speaking. Is the doubt I’m feeling telling me something useful or not?

At last night’s Casterbridge Speakers philosophy debate (an extra-ordinary meeting that we are holding once a month during these unusual circumstances of meeting weekly on Zoom) we explored the philosophical question of ‘doubt in these pandemic times’. Quite naturally we explored the moral issues around being a ‘good citizen’ during lockdown; what does that even mean? What is the role of government and those in the public eye in setting an example? How much does ‘group think’ and in particular the media influence what we believe or not?

We also explored the question of judging and condemning others for their actions, when they don’t comply with the new ‘rules’. We generally agreed that people who are more fearful are also more likely to fall victim to judging and condemning others. This was an observation of the impact of the current unprecedented circumstances rather than a judgement on whether or not it was right to be fearful.

Then we wondered about the impact of this pandemic on childhood development. This seemed such an enormous question and one that would almost certainly be the topic of much debate in the coming months and years.

We all gave thanks for living in Dorset, whilst recognising and appreciating the challenges faced by others less fortunate, living in cities, in close quarters and without a proper outside space to escape to. Finally, we asked the crucial question about whether or not we were troubled by doubt ourselves; whether indeed we saw it as friend or foe?

Personally, I see doubt as a friend. It’s a built-in signalling system that it’s time to reflect and wonder at my personal thinking and my state of mind. It allows for the question “is this true or not?” In recent years, as my understanding of how the mind works has deepened, I am seeing more often the illusions that are created by my thoughts. Returning to the original question of whether a speech will engage and entertain an audience. It’s a reasonable question for us as Toastmasters to ask but the intensity of the feeling accompanying it and the subsequent behaviour it leads to is only an indication of my state of mind at that moment and in no way a predictor of my future performance as a speaker.

What is doubt to you – friend or foe?

Thank you, Doug for organising and facilitating such an interesting and thought-provoking evening; it’s great to connect with friends and to stimulate the grey matter.  Anyone interested in joining us can find out more at www.casterbridgespeakers.org.uk

Watch this recent recording of the book launch 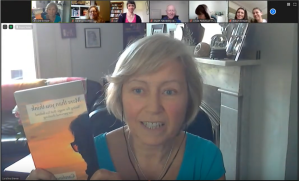 Let’s have a conversation

Contact me if you are interested in having a conversation about how you too can recognise your infinite potential and reconnect with your wisdom and well being.